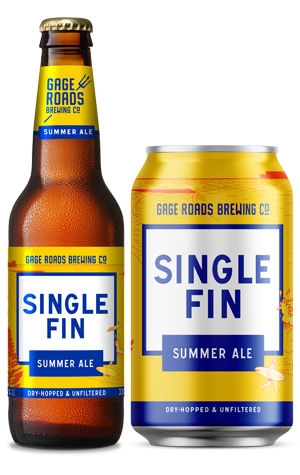 Within Australia's craftier beer circles, it's the likes of Little Dove and limited releases such as their IIPA and Sea Devil imperial stout that will have captured drinkers' attention. Yet it's been Single Fin that's been doing much of the heavy lifting as the brewery has enjoyed rapid growth since shedding Woolworths as a partner. The summer ale crashed the top five in the 2017 GABS Hottest 100 poll, in mid-strength form is one of the offerings for patrons at the new Perth Stadium and, according to figures from off-premise data agency IRI at the end of 2018, is Australia's fastest growing craft beer brand. It's got a solid success rate in beer awards too.

All of which is a rather long-winded way of saying you're likely to be seeing a lot more of it around, not least over summer 2018/19 as it becomes the first Gage Roads beer released in cans. It's a beer in which the hops deliver on the melon and soft 'n' citrusy side, sitting alongside a light malt sweetness with a touch of honey in the mix too. It's nicely balanced, appealingly aromatic and totally fit for purpose: an ale for summer.