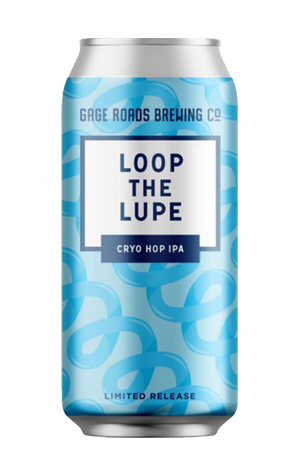 Earlier last decade, Gage Roads were on a roll with their regular limited releases; The Convict Australian strong ale and Changing Tides barleywine were two of the more memorable. However, as their Returning To Craft strategy dominated affairs in the second half of the 2010s, somewhat ironically these craftier releases became less of a concern.

So it’s with interest that a pair of on-trend Cryo hop IPAs arrive from brands under their Good Drinks banner: one from Gage Roads and the other from hop-exploring offshoot Atomic, which you can read about here.

From the parent comes Loop The Lupe, a West Coast IPA flush with Cryo Idaho 7, Citra and Azacca hops. Once I'd got my head around the name, there was the novelty that comes with eyeballing a glass of beer and seeing the other side of the room through it. Thus, granted this rare moment of clarity, I took a few moments as tangelo, grapefruit, candied citrus aromas orbited the glass. These continue with an apricot-stonefruit undercurrent and some sticky resinous action on the palate, while bitterness is firm and clean, its presence building along with a dryness that leaves Loop The Lupe the most hop forward release from the Palmyra brewers in some time.