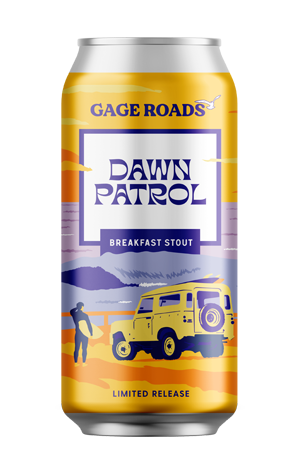 The caffeinated ritual signals the start of many days, not least the early risers chasing an elusive, uncrowded surf break. After winning a public vote, Gage Road’s winter limited release – the Dawn Patrol breakfast stout – may well be the reward for many after a morning in cool water.

Breakfast stouts are an adjunct-assisted extension of the familiar coffee and chocolate malt-derived characters found in many darker beers. For Dawn Patrol, the brewery collaborated with Perth coffee roasters Twin Peaks, using a Yellow Bourbon variety sourced from a farm in the Carmo De Minas region of Brazil known as Sertão. The roaster’s Thomas Green notes that the beans are processed naturally – whole cherries dried on the patio – and this expression provides “a rich, fudgey, chocolate backbone”, one that works equally well in the beer as it does the house blends.

Scaling up the morning cup, a series of substantial hot and full immersion ground coffee batches were prepared by the collaborators at Gage Roads, which was then flash chilled, before being added to the stout base. The result is a harmony of beer and bean, of which head brewer Ross Brown says: “We wanted that coffee to be that freshly poured espresso on the nose to start with, and fitting with the Breakfast Stout theme, there’s a lot of oats in there, and cocoa nibs circulated through the final stages.”

Unsurprisingly, the initial impression is one of: “Wow, that’s at lot of coffee!”, before espresso notes meld with cacao and dusty Bourneville tones. A smooth palate cloisters bitterness, running maturely dry – this ain’t a pastry party. As for whether the bean caffeine transfers, most breakfast stouts feature less than five percent of the caffeine found in one cup of coffee, which may be just enough for the swell crowd’s dawn patrol.