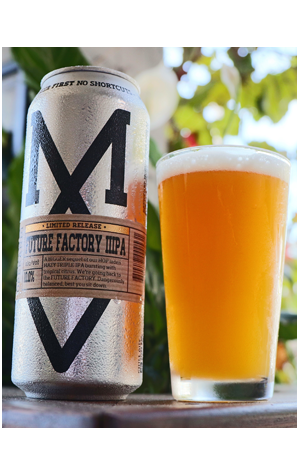 Even before the second (not third as we originally wrote) instalment in Modus Operandi's Future Factory series reached shelves, corners of the beer internet were closely watching to see where the cans would land. It’s little wonder: the Mona Vale brewery has done a marvellous job carving a place for its hop forward beers in the hearts of many a craft beer fan – not to mention beer judges – and a hazy triple IPA seems a surefire way to stoke excitement levels all the way up to ten. And that happens to be where the Modus brewers dialled the beer up to as well, causing us to ponder whether a 10 percent ABV triple IPA will not only be Modus’ first limited release can for 2019 but also their biggest...

That said, while such hefty booze content makes Future Factory a big beast, it manages to avoid being a brash one. You can certainly smell and feel the booze that lies beneath and a thick mouthfeel and attendant sweetness reinforce that fact you've got a big beer in your hand. But each element of its hop-derived flavours – the tropical fruit, the blood orange and the resinous pine – still leap from the beer while its relatively low bitterness ensures your palate isn't crushed under its own weight.