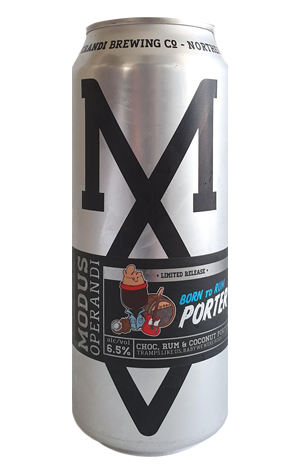 Is there anything better than combining Springsteen and craft beer? Not in this writer’s opinion.

Modus Operandi’s Boss-inspired Born To Rum was first poured at the Good Beer Week Gala in March 2019 and has been given the chance to run away with a much wider tinnie release for Easter.

Taste wise Born to Rum is a little like a rum-injected version of the brewery’s oft seen Silent Knight Porter – one that’s sprung with coconut too. As you strap your hands around the beer, it's the rich dark chocolate and roasted notes that are clearest but the toasted, boozy qualities of the rum quickly come through, meaning the spirit has no place left to hide.

It’s a little drier than you might expect from a dark beer sitting above 6 percent ABV but there’s still a rounded finish so the beer’s richer notes aren’t ripped from your palate. Beyond the rum and chocolate, as the beer warms up the coconut starts to rise too but that flavour remains slight, rather than coming on like a Bounty-fired, hemi-powered scream down the boulevard.