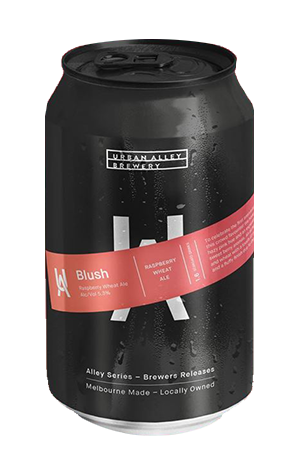 When the crew at Urban Alley opened the doors to their Docklands brewery doors a year ago, one of the limited release beers they sent into the world was Blush. The wheat ale came packed with raspberry goodness and, though only a small number of kegs were brewed at the time, the brewery say it’s been one of their best-received beers to date.

So, when the brewery venue's first birthday came around, they decided to re-release the beer, this time canning it and sending it a little wider. Pouring with a light pinkish hue, the beer’s raspberry flavour leans more towards the sweet than the tart, bringing to mind time spent scrounging together change for raspberry lollies from the school canteen. That berry sweetness sits alongside a slight tropical lift, which is in part thanks to the inclusion of the experimental American hop variety 10416.