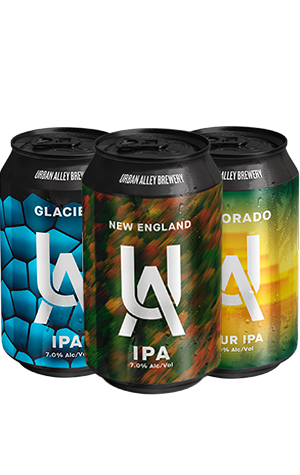 IPAs come in many forms and if you’d like to try a mix of them at once, Urban Alley have you covered by releasing no less than three together. Glacier IPA is beer that blends two styles too, with its design taking cues from both West Coasts and Cold IPAs. The hop combination is one of Strata, Centennial, Citra and Sultana which come together to deliver a wide mix of tropical fruits, bubblegum, citrus and pine. With a clean and bitter finish and vibrant orange and crystal clear body, it might be a beer that references the chilly depths but really, it feels more suited for a sunny afternoon.

NEIPA meanwhile is a showcase of Moutere and Citra hops, with the lush and hazy beer diving straight into tropical territory. By and large, those are of mango, pineapple and honeydew melon, while further fruits join in the shape of peach and tangy white grape.

That takes us to the final of the three and the least common when it comes to presenting hops, the sour IPA, El Dorado. Unsurprisingly, El Dorado hops are a feature here but so too are Mandarina and Simcoe and Philly Sour yeast, which brings a tartness that’s a fitting companion to the array of mandarin, citrus zest and breakfast juice.