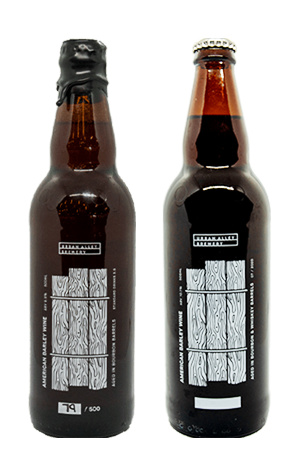 Most of the time, you’ll find Urban Alley’s releases in either jet black or glistening white cans, but when you turn to barrel-ageing barleywines, it’s always a good idea to do something special. The special in this case is 500ml bottles that are individually numbered; the Docklands brewery even have two vintages of their American Barleywine available at once, both of which have spent months in bourbon barrels.

The 2019 release weighs 9.9 percent ABV, pours a deep copper and is filled with flavours of toffee, raisins and caramel, plus an additional sweetness from the bourbon. It’s not all rich notes, though, with the hop combination of Warrior, Amarillo, Centennial and Chinook punching out pine and resin while also providing what’s really quite a gripping bitterness.

As for 2020, it has a whisker more booze and, while it retains that same mix of toffee, raisin and caramel, it's substantially richer and smoother. Largely, that’s thanks to notes of plum, plus an oaky vanilla that, in tangent with a lower bitterness, sees it lean heavily into dessert territory.