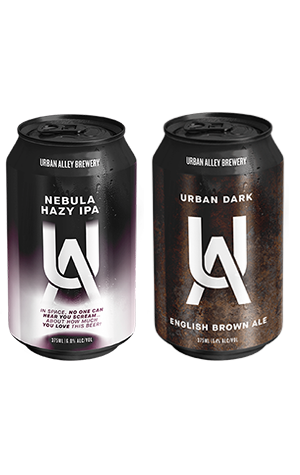 "Woah, that looks really juicy - if it didn't have a head I'd think it was pineapple juice.”

A writer’s job is far easier when you let someone else’s words kick off your work, particularly when they have a snappy line that really captures the vibe you're going for. Those words above were spoken by a housemate when I poured a glass of Urban Alley’s Nebula and it’s hard to think of anything that would better suit how it looks. Given the beer is a hazy IPA, that's certainly what the Melbourne brewery was going for, while the beer's quite substantial subheading of “in space, no one can hear you scream... about how much you love this beer”, provides an extraterrestrial layer to Nebula.

It’s difficult to know how many different fruits space contains, but presumably given its vast size there must be a few planets that can capture the flavours emitted by Eclipse, Galaxy, Amarillo, Cashmere and Citra. Together, they coalesce into a juicy mix of pineapple, passionfruit, peach and mandarin to the point where you can’t help but feel a little bad thinking about how many planets don't get to enjoy these kinds of flavours...

Urban Dark, meanwhile, is a former member of the brewery's core range that was designed when Shaya Rubinstein was still head brewer. You can experience Shaya revisiting the beer here but, effectively, it's one inspired by those hailing from England’s north. It's also designed to be enjoyed in every season, with a slight floral side thanks to the use of East Kent Golding and Willamette hops before richer but also roasted elements take over and the beer finishes with a slight bitterness. Unfortunately, the housemate had left the room by the time I opened this one, leaving me with nothing snappy to finish with...