Beer Urban Alley The Rubinstein & Fire In The Hole 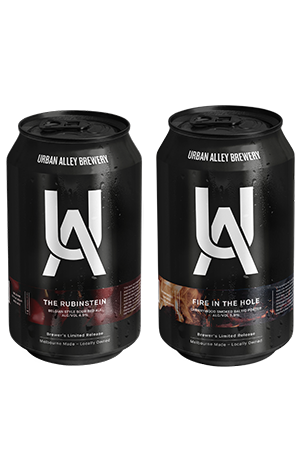 Urban Alley have two autumnal releases out for 2021 and they’re the type of beers that manage to suit both the sunny and the tremendously cold days the season brings in Melbourne. For the slightly warmer afternoons, there’s The Rubinstein, a Belgian-style sour red ale named for the brewery’s longtime head brewer, Shaya Rubinstein. Having used American oak to make the beer, it's that character that really leads the charge with a real depth of palate weight and big notes of vanilla filling the glass. The sourness is more towards the slightly tart end of the scale while there's also quite a vinous quality and some classic Belgian-yeast fruit esters that bring a touch of spice.

Whereas Fire In The Hole seems fit for the cooler moment of the season, with the Baltic porter containing malts smoked with both American Cherrywood and Australian Stringybark. Much like the first fire in a pub for the season, the smoked notes are quite upfront at first and are similar to what you'd find in a classic German rauchbier with bacon or ham quickly coming to mind. It’s not all smoke and pork though, beneath them you’ll find dark fruits and chocolate too which make the beer a bit like eating an indulgent bit of cake beside the aforementioned pub fire.