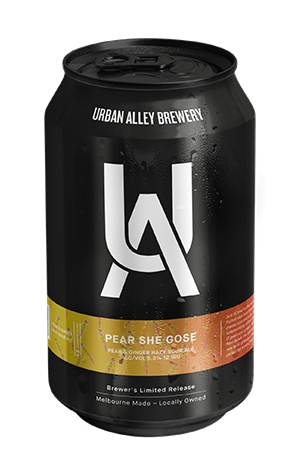 Greeting Melbourne’s warmer weather and renewed freedom are Urban Alley with a fruited kettle sour named Pear She Gose. Made with both pear and ginger and pouring a hazy yellowish orange, it’s a beer that packs quite the whack of ginger too.

The latter mixed with pear immediately brought to my mind a home-cooked pear cake but that's not to say the beer is in any way sweet. Quite the opposite, in fact:, it's very dry and that dryness combined with Pear She Gose's tart edge brings proceedings very comfortably into ginger beer territory.