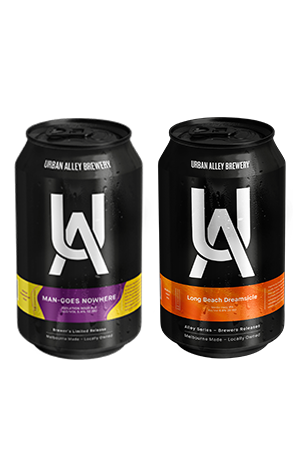 Spring 2020 sees two new beers arrive from Urban Alley’s limited run Alley Series, both of which manage to capture what Melburnians are up to and where we’d like to be. First up, there's Man-Goes Nowhere, an “isolation sour ale” featuring mango and passionfruit. It’s also dry-hopped with Amarillo which adds a layer of orange, the tropical twang of mango, and passionfruit and, while it’s not mouth-puckeringly sour, its tart edge and a rather spritzy carbonation do make it a beer that would suit the beach.

But maybe that’s more Long Beach Dreamsicle, a Nordic Hazy IPA brewed with kveik yeast and inspired by both creamsicles and the American brewery Long Beach Beer Lab. The beer packs layers of tropical fruit and mango into what's an incredibly soft and creamy body. While Mang-Goes Nowhere comes with a hint of orange, Dreamsicle is positively swimming it, albeit rounded out by a slight piney and herbal note from the hops too.