As Australia’s local beer scene continues to spread its wings and encroach ever more into the mainstream, breweries are beginning to be found everywhere. Once an industrial warehouse or characterful building in a regional town seemed to be the most likely spot to find a local brewery, but that’s changed.

Melbourne’s Urban Alley Brewery shows just how craft beer can find a home in all manner of places, with their brewery opening the doors to their District Docklands home in 2018. Located in the heart of the tourist-friendly retail district and a short walk from Marvel Stadium and Melbourne’s CBD, Urban Alley’s arrival in Docklands has seen them bring local beer to a substantial community right on the city’s doorstep.

Owners Dean Grant and Bruce Davey have a long history in the hospitality industry, with Dean’s name best connected with the likes of the Ireland-inspired Bridie O'Reilly's and the classic English-style pub, Elephant & Wheelbarrow. So having spent some years bringing international beer experiences to Australia, Urban Alley feels like a fitting evolution where those owners are bringing local beer to new craft beer drinkers.

Often, it’s a space that swells with Melbourne’s tourists, although with plenty of offices in the area and an increasing number calling Docklands home, you’re just as likely to find someone heading in for a knock-off drink or a sneaky beer on the way home. On weekends in particular it’s become a popular spot for families, with parents keen to end a day’s shopping in the adjacent malls with a freshly tapped beer and modern pub fare.

The venue itself is an expansive one with two outdoor areas and an industrial but welcoming interior that can host close to 700 people. Despite its size, the fact it’s a working brewery is impossible to miss given the stainless steel is visible from almost any seat inside the bar.

The brewhouse is a 25-hectolitre system that keeps the Urban Alley taps full and produces the cans that you’ll find in bottleshops and bars across Melbourne and further afield too. The core range includes Urban Ale, Slapshot Aussie Pale Ale, Urban Lager, the session ale All Nighter and an alcohol-free pale ale, Urban Myth. The brewery also frequently brews a range of limited releases, from hazy IPAs, to stouts, sours and big barleywines, with both those core beers and limiteds having found success at beer awards over the years.

Like many breweries large and small, old and new, Urban Alley isn’t just looking to produce beer for the local market, but is aiming to do so sustainably. Its green credentials are bolstered by the ability to treat water onsite and by being the first brewing company in Australia to use E6PR six-pack holder rings made of recycled material that can be composted once you’ve finished your beer too.

Given Urban Alley is built on a goal to bring local beer to new people and neighbourhoods, when you drink a fresh pint of their beer in the heart of Docklands, you can’t help but feel it’s mission accomplished. But on the other hand, with a second Urban Alley brewpub opening in Knox Ozone in Melbourne’s outer east in 2022, it feels like the brewery has big plans ahead. Urban Ale is a beer that sits in that broad category that can probably best be thought of as a golden ale, kolsch or a blonde ale. It’s light and refreshing, with a pale golden and light-flavoured malt body and a slight citrus hop and more floral character. Like kolsch, it's fermented colder than a regular ale which helps ensure it's a clean and crisp beer that would be a fitting way to introduce craft beer drinkers to the broader beer world of today. Will Ziebell… Read more
Golden Yellow For Urban Alley's core range lager, the brewers have restricted themselves to a single hop and single malt – pilsner malt and German Hersbrucker hops. In other words, it's one where the style's traditional roots rather than New World twists are to the fore. It's a combination that imparts some floral and spice aromas atop a lightly sweet malt backbone for a beer that's comfortably best ordered by the pint. Will Ziebell… Read more
Pale Yellow All Nighter is Urban Alley’s midstrength, a beer designed for a day spent at a music festival or alternatively, a late-night watching your favourite band. Presumably, there are many other occasions you can drink it, I just absolutely love drinking sessionable and hoppy beers while watching bands. Added to the Dockland’s brewery’s core range in 2020, that’s exactly what All Nighter is; a 3.5 percent ABV beer with slight floral notes plus flavours of fresh mandarin and peach. Brewed with oat… Read more
Pale Yellow Joining Urban Alley’s core lineup in 2020 is the Aussie Pale Ale, Slapshot. It’s a style that means many different things for many different people and for the Dockland’s brewery, it means packing a punch with new world hops and giving it a reasonable malt base to balance things out. Pouring orange, Slapshot hits with a big whack of citrus and then is joined by passionfruit, mango and pine before finishing with a building bitterness. Will Ziebell… Read more
Golden Yellow 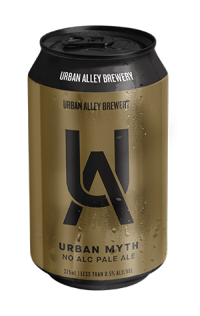 Even the briefest glance at Urban Alley’s Urban Myth makes it clear this stands apart from the rest of the Melbourne brewery's core range. The golden-clad can was added to the lineup late in 2021 as their first alcohol-free offering: a Cascade and Citra hopped pale ale sitting below 0.5 percent ABV. While the beer's colour doesn't stand out as much as the can, it does pour with a golden straw hue, while the two hops provide grapefruit, lemon and an underlying floral flavour alongside a breadiness… Read more
Pale Yellow "Woah, that looks really juicy - if it didn't have a head I'd think it was pineapple juice.” A writer’s job is far easier when you let someone else’s words kick off your work, particularly when they have a snappy line that really captures the vibe you're going for. Those words above were spoken by a housemate when I poured a glass of Urban Alley’s Nebula and it’s hard to think of anything that would better suit how it looks. Given the beer is a hazy IPA, that's certainly what the Melbourne… Read more
Rich Brown If you’re reading these words, there’s every possibility a crisp pilsner will be your pre-dinner drink of choice. But, say there are moments where a perfectly-poured, clear golden beer doesn't quite suit and it's more a cocktail you're looking for, well, even then Urban Alley might have you covered with their first limited release of 2022. Aperitivo Pilsner twists and turns from truly classic pils in a couple of ways: firstly, it's an Italian-style pilsner – beers typified by their use of dry-hopping;… Read more
Golden Urban Alley’s Brewer’s Limited Release beers have taken the Docklands brewery in many directions: lacing sours with fruits; slowly ageing beers in barrels, for example. But for their November 2021 Hazy IPA, the mantra has been a simple one of no twists or novelties: just big flavours delivered by hops alone. The hops in question are the kind of trio that does wonders in a modern hazy, with Citra, Galaxy and Cashmere providing a broad sweep of tropical flavours. Pick the beer apart and you have… Read more
Golden Yellow Urban Alley The Rubinstein & Fire In The Hole

Urban Alley have two autumnal releases out for 2021 and they’re the type of beers that manage to suit both the sunny and the tremendously cold days the season brings in Melbourne. For the slightly warmer afternoons, there’s The Rubinstein, a Belgian-style sour red ale named for the brewery’s longtime head brewer, Shaya Rubinstein. Having used American oak to make the beer, it's that character that really leads the charge with a real depth of palate weight and big notes of vanilla filling the… Read more
Rich Brown Greeting Melbourne’s warmer weather and renewed freedom are Urban Alley with a fruited kettle sour named Pear She Gose. Made with both pear and ginger and pouring a hazy yellowish orange, it’s a beer that packs quite the whack of ginger too. The latter mixed with pear immediately brought to my mind a home-cooked pear cake but that's not to say the beer is in any way sweet. Quite the opposite, in fact:, it's very dry and that dryness combined with Pear She Gose's tart edge brings proceedings… Read more
Pale Yellow Most of the time, you’ll find Urban Alley’s releases in either jet black or glistening white cans, but when you turn to barrel-ageing barleywines, it’s always a good idea to do something special. The special in this case is 500ml bottles that are individually numbered; the Docklands brewery even have two vintages of their American Barleywine available at once, both of which have spent months in bourbon barrels. The 2019 release weighs 9.9 percent ABV, pours a deep copper and is filled with… Read more
Dark Brown Following on from the prior releases, Man-Goes Nowhere and Long Beach Dreamsicle, it looks like the team at Urban Alley still wishes they were elsewhere (and who can blame them) as Melbourne’s lockdown rumbles on like a question from Peta Credlin. The returning Alley Dangler, first brewed in March 2020, aims to transport us to the German town of Bamberg and the rauchbiers upon which this smoked amber lager is closely modelled. Using Australian wood-smoked malt, it’s impressive just how closely… Read more
Golden Spring 2020 sees two new beers arrive from Urban Alley’s limited run Alley Series, both of which manage to capture what Melburnians are up to and where we’d like to be. First up, there's Man-Goes Nowhere, an “isolation sour ale” featuring mango and passionfruit. It’s also dry-hopped with Amarillo which adds a layer of orange, the tropical twang of mango, and passionfruit and, while it’s not mouth-puckeringly sour, its tart edge and a rather spritzy carbonation do make it a beer that would… Read more
Pale Yellow When the crew at Urban Alley opened the doors to their Docklands brewery doors a year ago, one of the limited release beers they sent into the world was Blush. The wheat ale came packed with raspberry goodness and, though only a small number of kegs were brewed at the time, the brewery say it’s been one of their best-received beers to date. So, when the brewery venue's first birthday came around, they decided to re-release the beer, this time canning it and sending it a little wider. Pouring with… Read more
Red With their sweet yet often reasonably light malt body and a decent whack of flavour sourced from the hops department, red IPAs naturally feel like the kind of beer brewers should release in autumn: a bridge between the lighter, flightier beers of summer and the brooding ales of winter. And that’s precisely what Docklands’ Urban Alley have done as part of their Alley Series, which sees the brewery’s limited releases make their way into the world in rather eye-catching jet black tinnies. Not… Read more
Red