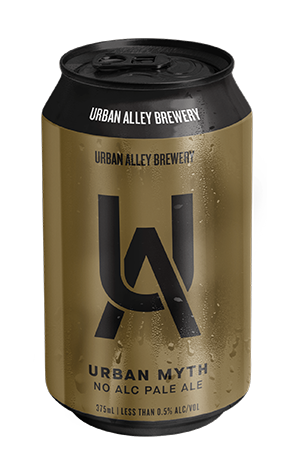 Even the briefest glance at Urban Alley’s Urban Myth makes it clear this stands apart from the rest of the Melbourne brewery's core range. The golden-clad can was added to the lineup late in 2021 as their first alcohol-free offering: a Cascade and Citra hopped pale ale sitting below 0.5 percent ABV.

While the beer's colour doesn't stand out as much as the can, it does pour with a golden straw hue, while the two hops provide grapefruit, lemon and an underlying floral flavour alongside a breadiness from the malts. Although there is a bit of sweetness when compared to a full-strength pale ale, there's also quite a balancing bitterness, the result of which shows that, in the current era of brewing, full-flavoured beers free of alcohol are no urban myth.