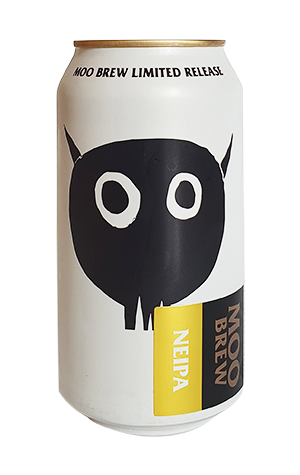 Earlier in 2019, Moo Brew kicked off a roster of new releases every few months – a first for a brewery best known for its focus on a largely traditional core range. To welcome summer and close out the year, the Tasmanian brewers have gone for a style far from traditional and one few might have seen Moo brewing until recently too: a New England IPA. Like the recent Belgian pale launch, the beer comes with its own model too, only rather than finding the palest Belgian male, the Moo team has gone with its own head brewer (and head thirst-trap) Dave Macgill.

Even if it's a little less traditional than Moo’s typical releases, like Dave’s beers, the NEIPA is particularly balanced and drinkable. It looks entirely opaque and like the palest gold you might find, with Citra, Mosaic and Enigma driving a medley of lively tropical hop flavours. Mostly, we picked up passionfruit, pineapple and rockmelon jumping from the beer's soft body, backed up by a bitterness that, like Dave, is larger than most examples of its species.