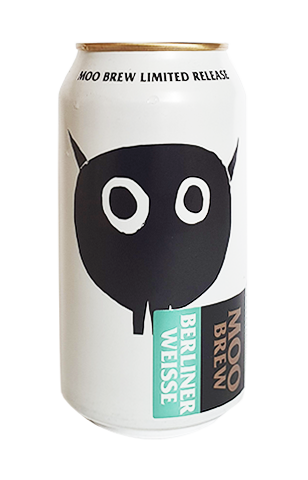 Moo Brew’s limited release series that kicked off last year haven’t just been about giving the world more of their balanced, dialled in beers but have also featured a run of madcap promotional campaigns. We’ve had a Red IPA launched at Dark Mofo, the palest Belgian male promoting a Belgian Pale and Moo head brewer Dave Macgill showing off as the brewery’s head thirst-trap and NEIPA model. But what else would you expect from a brewery that’s part of David Walsh’s art, culture, food and booze empire centred around MONA?

Now we welcome a Berliner Weisse that’s so Berlin it has its own four-minute techno track. And, though the marketing may be achieved with maximum laughs, Berliner is the sort of well-considered beer at which the Hobart brewery is so adept. Though it’s brewed with the addition of passionfruit, the beer’s a far cry from the fruit-heavy nature of many sours out there. Instead, along with light tropical notes I picked up lots of lemon sherbet, cucumber, melon rind and a doughy finish in the tart and crisp beer that's likely to prompt a refreshing smile. Just don't drink it in the line to the Berghain.

Plus other stockists found here