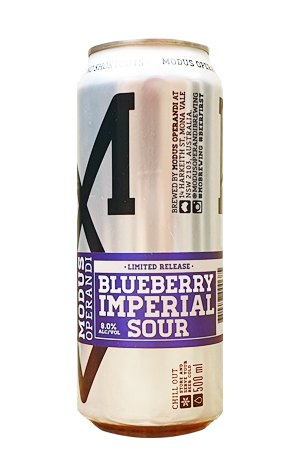 Three hundred kilos of blueberries. That's an awful lot of blueberries. If you're having trouble visualising it, that’s 2,400 punnets, or approximately 2.8 plump Violet Beauregardes. It's also how many blueberries the team at Modus Operandi put into their Blueberry Imperial Sour.

Apparently the team "hand pummelled” the blueberries. I like to imagine that's exactly as messy as it sounds, possibly also involving a lot of stomping (hygienically, of course), but I guess it's more likely they used some kind of blueberry crushing tool. In any case, one look at the beer and you can see the effects of the glut of fruit - the beer is an intense ruby with a purple tinge, and dense, candy pink foam.

The aroma is sweet like blueberry pie, and makes you want to eat a slice with some vanilla ice cream. So if you hadn't read the label, the first sip could come as a surprise as it introduces the taste of sour purple Skittles. But, before long, the blueberry pie sweetness returns, complete with a thick, creamy texture.

On nationwide release wherever you find Modus beers