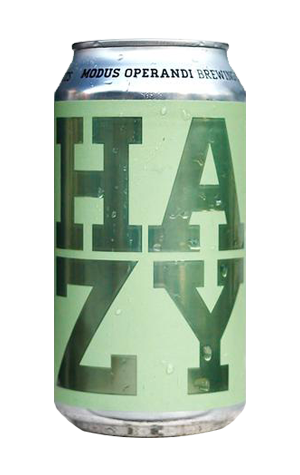 When Modus said they were going to “take it up a notch” with their Hazy program, and that “the series gives us licence to play with yeast and hops and dial up the ABV”, they weren’t kidding. The fourth in the series is a triple dry-hopped, ten percent ABV fire hazard (in a good way).

We’ve all heard of “Stop, Drop and Roll” when it comes to fire safety. Well, with this hot thing, we need to follow those instructions in reverse.

Roll - Roll the can briefly before opening to wake up the haze. That’ll make sure your beer looks like molten lava and feels thick and soft on the tongue.

Drop - Drop whatever else you’re doing; this beer demands your full attention. This isn’t just something cold to throw back after mowing the lawn. It’s a cornucopia of hops, packed to the brim with Mosaic, Azacca, and the as-yet-unnamed Kiwi variety HORT 4337, and it doesn’t do subtlety. There’s a little bit of dankness in there, but the main flavours inundating your tastebuds are grapefruit zest, sticky pawpaw, and mango nectar. Perfect for when you're feeling like fruit salad but also like you have the constitution of a world champion weightlifter.

Stop - Stop after you’ve had one or two. It’s surprisingly easy to drink for its strength, so be careful not to accidentally knock back a four-pack of this then find yourself unable to perform simple tasks like scratching your nose without poking yourself in the eye. It’s a good thing we’re already stuck at home, because you won’t be doing too much after a couple of these potent potions. Enjoy responsibly from the comfort of your couch fort, then curl up for a nap at the end of it.