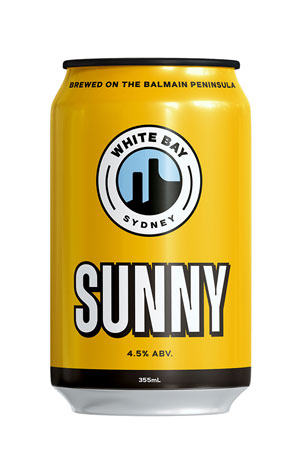 Just as sunshine sparkling off the water in White Bay is at once serene and delightful, this light golden blonde at once calms and excites.

Like its sibling Lager, Sunny carries a fluffy white head and lacing that lingers in the glass til the very end. But, unlike Lager, the aptly named Sunny Pale Ale overflows with hop aroma. While this naturally hazy beer is closest in style to a hoppy American blonde, the smell of Sunny is distinctly Australian - the Galaxy hops fill it with passionfruit, grapefruit tang and just a touch of resin.

After the impressive aroma, the flavour is a bit more mellow, with the fruitiness ebbing away to a more sessionable finish - dry with a gentle but persistent bitterness. This beer is sunglasses and shorts; knockoff drinks and summer holidays; easy to throw back but hard to put down.