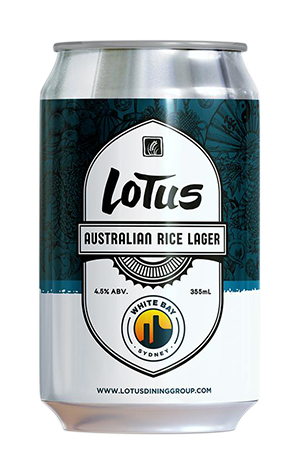 With eight venues across Sydney, Lotus Dining Group goes through a lot of rice and a lot of beer. Partnering with a brewery to create a rice lager to pair with their Asian dishes was a logical step and White Bay’s a brewery that takes lager damn seriously.

The Lotus lager sparkles in the light, and its glassy appearance is a gorgeous visual representation of how clean this beer is. The brew team at White Bay are a patient bunch, leaving this lager fermenting under pressure for five weeks.

There’s a light pear character that I would have guessed came from the newer German hops in the hop bill (alongside older German varieties), but apparently it’s from the 20 percent flaked rice in the mash and maybe that shouldn’t be surprising since I’ve tasted that same crisp flavour in a glass of sake before. Imagine a dry pear cider - I mean astronomically dry, without a hint of sweetness - with a snappiness of flavour, but the softness of flowing silk.

You can buy this beer from Lotus At Home, or from White Bay’s brewery taproom. Pair it with your own bodyweight of dumplings and you’ll have a good time.