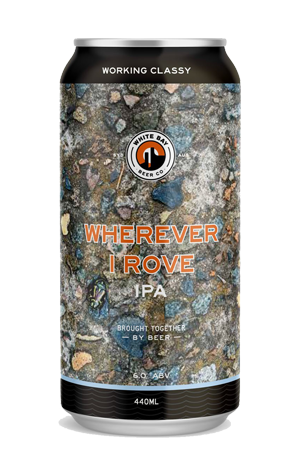 The plan at young Sydney brewery White Bay is to always have an IPA as part of their lineup. Just not the same one all the time. And with head brewer Dennis de Boer having spent a few years knocking out IPAs a little to the north at Modus Operandi before becoming part of the founding team at the Balmain operation, it's a style he knows inside out.

In the case of Wherever I Rove, the statement on the cans that it's brewed with "bushels of oats" might have minds picturing a hefty, hazy affair, but that's far from the reality. This is no oat cream sweet treat; here, the oats are used to give the beer a sturdiness, as they are, for example, in Two Birds' core range Pale Ale. They instead allow the Mosaic and Lemondrop hops to shine free in a lean, dry and finely structured IPA reminiscent of Thornbridge's Jaipur. The brewers mention limoncello among the beer's characteristics and it's a good call, while there's pine and grapefruit throughout the pale gold drop too, and a herbaceous spicy undercurrent adding depth to a beer you'd happily join on its travels.