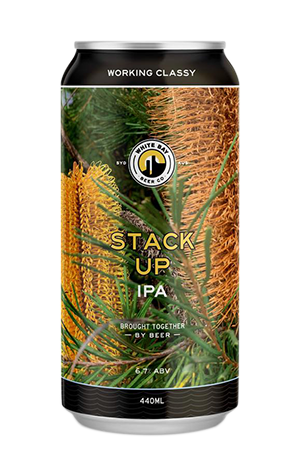 The White Bay team use their IPA series to have fun with hops, and Stack Up is no exception. Five different hop varieties, added in a few different formats, make this beer the tropical medley it is.

In this new world of hazy IPAs, we’re constantly talking about dry-hopping, but before the multiple rounds of dry-hopping this beer received – with Vic Secret, Calypso, Cashmere Cryo and Citra – the stage was already set with enough Mosaic to make your head spin. As well as more traditional pellets, the Mosaic also entered in the form of Incognito, a new hop technology that concentrates the pure hops for bigger flavour impact. White Bay have been playing with this new technology more and more in the brewhouse – “we live and die by Incognito” – and I don’t think anyone’s going to be complaining about that any time soon.

In the glass, Stack Up has this inner orange glow that delights the eyes, and radiates mandarin and mango and sherbet to please the nose, with just a hint of dankness. The mandarin keeps bursting in the mouth, with a sideline of mango sweetness, and brings a touch of mandarin peel bitterness to curb the sweetness of the juicy blast.