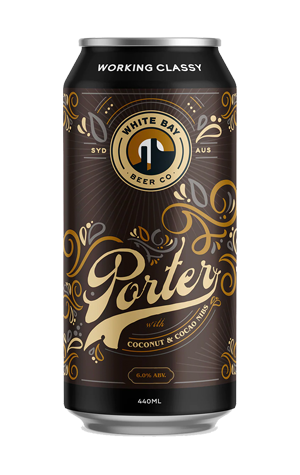 Now, I'll admit to having done zero research on this, but I'd wager there's a very good chance Sydney brewery White Bay have been the most avid producers of porters since they launched. Given how few and far between porters are in Australia (OK, anywhere, really), and how far removed they are from the beers lighting up beerstagrammer accounts, it's not exactly a high bar. Yet their dedication to such beers is noticeable, and they're at it again here with a release in which it's worth paying attention to the fine print. A glance at the can leaves you in no doubt this is a "Porter", but the qualifiers in smaller font are just as important: "w/ coconut and cocoa nibs". As is the inclusion of lactose.

That's because there's a distinct creaminess that hits first, unfurling into a dark / milk chocolate nougat-esque richness. It's akin to the sort of dense, chocolaty dessert you decide to order at the end of a hearty meal out – one drizzled with a sweety, nutty, syrupy sauce – albeit distilled into liquid form. Subtly decadent.