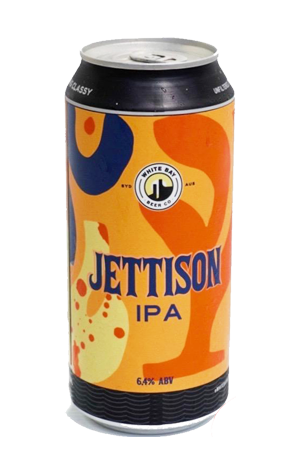 Chatting to the White Bay crew at this month's Canberra Craft Beer & Cider Festival, it's clear that not only do they have grand ambitions but also that they want to see their Union Lager become their flagship. Yet, while they back their tightly wound lager to the hilt, they clearly have a soft spot for the world of IPA too, with new variants appearing every few weeks.

The newest of those pouring at the festival (and out widely in cans) is Jettison, a beer they describe as "friggin plush" thanks to the liberal application of oats and raw wheat alongside their house ale strain. On the hop front, it's Mosaic in cahoots with the lesser-seen Lotus – another of the new wave of hops that aims to deliver a smorgasbord of fruity and vanilla like expressions – and the outcome is pretty much freshly squeezed brekkie juice – there's no pulp but it's full enough on the palate there may as well be – as beer. If you know their core range Sunny Pale Ale, imagine that with more oomph in its belly and you're on the right track.