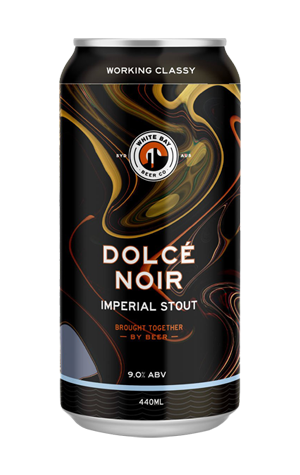 Given the era in which we live – one in which there's a flurry of excitement for dessert-like releases in which one of the only ways to identify the liquid as beer is the word "beer" on the label – and the contents of the ingredient list on Dolcé Noir, you'd be forgiven for thinking this winter release from White Bay should come with a handy guide on how to unblock arteries. Not only is it a 9 percenter but it's tagged a chocolate stout and features lactose as well as toasted hazelnuts and vanilla beans.

On the other hand, if you're au fait with releases to date from the Balmain brewery, you'll likely have picked up that head brewer Dennis de Boer prefers his beers tightly wound. Of course, there's limits to how tightly wound you can make an imperial chocolate stout featuring lactose, toasted hazelnuts and vanilla beans, but he's given it a red hot go.

So, instead of a swampy artery-fluffer, you have a beer in which the dark chocolate, sweet nuttiness and rich fudge flavours are delivered in a very palatable manner. If you're of my wife's era and tastes, it makes a great pairing for Ferrero Rocher or can easily stand alone as a dessert on its own, albeit one you won't struggle to polish off even in its 440ml serve. Who knows, you might even go back for seconds...