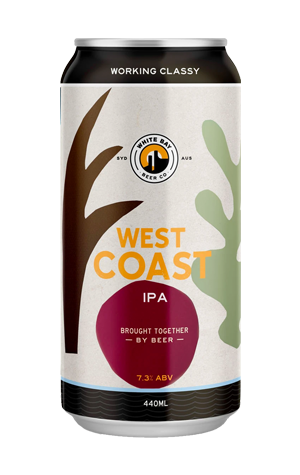 The fightback continues... After a few years in which a haze has descended over the world of IPAs, smothering bitterness, boosting sweetness and fluffiness, and making the category increasingly home to words such as "juicy" and "fruity", the past is making itself felt. You could already see a growing number of West Coast IPAs appearing as 2020 dragged on – admittedly often with hop profiles very different to those of a decade before, but brighter in the glass and more bitter on the palate than their hazy brethren – and the first weeks of 2021 suggest it's a trend that's only going to continue.

White Bay's arrives "spurred on by Sam the brewer’s thirst for an IPA with some bitterness", leading the Sydney brewers to "absolutely pulverise [the] beer with our whole arsenal of hops". It also arrives with a golden glow, from which flows a three-tiered beer: deep citrus and grapefruit top notes, a very light caramel sweetness as filling, and that nostalgia-sparking, piney, earthy, forest floor dankness underneath. There's a little sherbet to the aroma, a fullness of texture that borders on oily, and a bitterness that carries plenty of hop flavour with it beyond the moment it’s disappeared down your throat.

Another piece of evidence you can enter into the case file titled: "Why West Coast IPAs are here to stay."