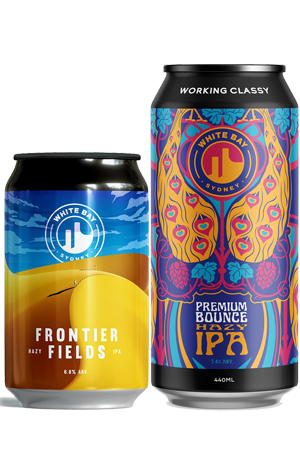 It sure would be interesting (at least to a nerd like myself) to know who has released the most IPAs in 2021. There would be the obvious names thrown into the hat – the likes of Akasha, Range, Mr Banks, Mountain Culture, Cheeky Monkey, Rocky Ridge, Black Hops – but you'd figure White Bay would be up there. One of the younger of Sydney's breweries, they've been knocking out IPAs at a serious rate of knots this year, with two hazies landing at once in December.

Starting with the smaller (in can size and ABV), we have Frontier Fields, the hazier, peachier-looking of the two, which opens with fulsome citrus and stone fruit aromas that pave the way for something deeper on the palate. Mosaic, Strata and Lemon Drop hops combine in the manner of fleshy pineapple and dense brekkie juice. Structurally, it's less about bitterness than creating a textural juicy grip when it comes to sating the thirst of the desert travellers on the label.

Premium Bounce might be the boozier of the two, but it's arguably the more refreshing too, its peacock-reimagined-by-Alex-Grey cans home to tropical passionfruit vibes that soon open up into pungent skunk weed. This was something of a surprise (or my palate was still recovering from 16 cold IPAs in our blind tasting) as Strata is typically associated with buddy aromas, whereas this pairs the familiar and fruit forward Citra and Idaho 7 with Triumph, a new arrival from the US said to give brewers orange, lime and peach to play with. Either way, it's lighter in colour and haze than Frontier Fields, and lighter and crisper on the palate too.