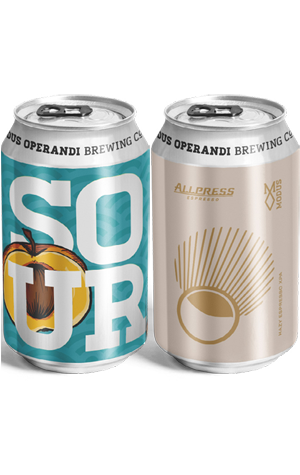 Hollywood may be feeling the strain as cinemas the world over remain closed or operating under restrictions for some time yet. But one of the major studios' safest pre-pandemic bets when it comes to filling the coffers is alive and well in the beer world. In this era of unlimited limiteds, breweries are looking to instil some sense of order by creating sequels and series within their small batch release schedules, including Modus Operandi, who here follow up their Hazy Series (already up to number seven) with Sour.

Kicking things off is Apricot & Sea Salt, and you'd need to have a serious cold or COVID-19 loss of smell not to notice even if you were handed a glass without seeing the cans. There's no mistaking the fleshy fruit emerging from the glass, something that carries on through the palate. The saltiness is less prominent, overshadowed by the Kiwi hop-embellished fruitiness and a pleasantly bracing acidity. It's a combination that leaves you with a sour as full of fruit as you could wish for yet kept from becoming heavy of juice like by that sour side.

For Hazy Espresso XPA, the Northern Beaches brewers crossed the beams with Allpress Espresso and, in opting for punchy, candied fruity hops as well as espresso coffee, created something of an arm wrestle in which the hops ultimately win – at least aroma wise. The coffee carves a streaky of espresso bitterness through the sweet, tropical, peachy flavours and creates an impression of dark choc in the mix too, the result being an XPA with more going on than most bearing the tag.