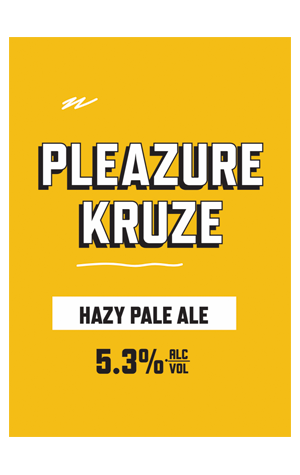 When they finally opened the doors to their home in Melbourne's southeast in which to entertain guests – the KAIJU! Cantina – the brewers have set about creating a selection of venue-only beers too. The first of those to hit taps is Pleazure Kruze, which represents their entry into the increasingly-popular hazy pale space.

Take a look at the hops in the mix – Amarillo, Nelson Sauvin, Citra, El Dorado, Mosaic and Galaxy – and you might suspect it's been given the sort of potency of the IPAs in their stable, yet the reality is that the hops have been handled with the delicacy required of the style. There's plenty in the way of stone fruit and citrus – particularly grapefruit – within its not-overtly-hazy yellowness, with the result a beer that's soft without being flabby, fruity, refreshing, and cleansing – the sort you'd happily settle into with one of their pizzas in front of you, in fact.

Available on tap at the KAIJU! Cantina