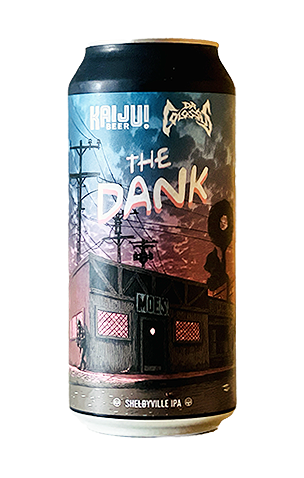 A week or two before receiving this collab with Dr Colossus – brewed to mark the fifth anniversary of The Simpsons stoner rockers' album, The Dank – I'd sampled another IPA from KAIJU! Immortal Jellyfish was a hazy which felt "like something of a counterpoint to the sort of IPAs upon which they built their reputation; sweeter rather than dry and bitter". Who'd have thought the return to type would come so soon?

With The Dank – tagged a Shelbyville IPA and wrapped in the album's moody cartoon artwork – it's pretty much everything Immortal Jellyfish isn't; well, other than both sitting within IPA's ever-wider umbrella. It could hardly pour a clearer copper and, while there's rind-like fruitiness and a background note of light caramel at play, this is a much deeper – well, danker – affair in which the spicy, piney nature of the aroma is more prominent. That said, the punch comes with your first sip: lean, dry, and (again) spicily bitter, wrapped in a swirl of mouth-coating resin that leaves little chance for any malt sweetness to make itself known. One to give the barflies of Moe's Tavern a jolt to the system, for sure.