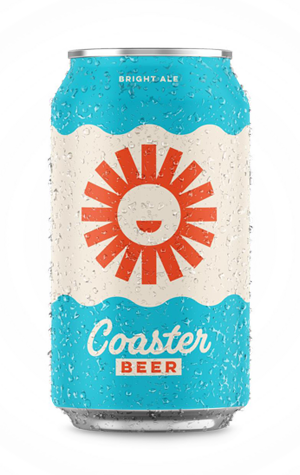 As many of the country's craft brewers look to entice more drinkers away from mainstream brands, we're seeing a growing number of easy-drinkers with sharp price points hitting retailers. And, as of summer 2021/22, you can add South East Brewing Co to that band of brewers.

If the name doesn't sound familiar, their other brands will, as they're the folks behind KAIJU! beers and Golden Axe Cider. It shouldn't take too much detective work to figure out what they have in mind with Coaster Beer either. Even if the name doesn't give it away, the fun, breezy cans should: a smiling sun, waves rippling their way around the top and the bottom... Yep, this is a beer with summery fun times in mind.

It's tagged a "bright ale", a name most closely associated with the beer of the same name once brewed by Little Creature, but could as easily be called a "sparkling" or "refreshing" ale. Certainly, it's a far cry from the often high ABV, always highly-hopped releases from Coaster's stablemate.

There's a hint of floral hops and fruity esters, albeit playing second fiddle to sweet, sponge like malts. Finishing drily crisp as much as it is bitter, it's designed for filling Eskies and knocking back at picnics and barbies when beer is the lubricant for conversation, rather than the topic of conversation.