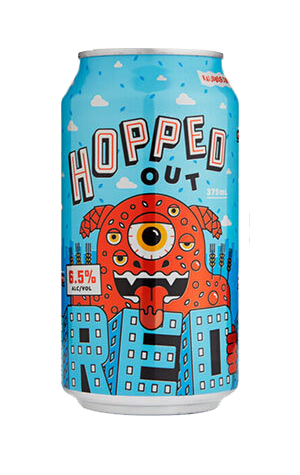 As welcomes go, my reacquaintance with Hopped Out Red after a three year absence was a good one. No sooner had I swirled the dark ruddy red liquid in my goblet and shoved my nose in than I was emitting an involuntary: "Oh god!"

Don't worry – there's nowt wrong with it. I'd just forgotten what a punch the second beer ever released by KAIJU! (before they were KAIJU!) packs. And this time around – its first in three years – it's a slightly altered beast too, with Galaxy hops added to the existing Mosaic and Columbus. And presumably the Aussie-grown addition is at least partially responsible for my blaspheming as the lively, piney hop aromas explode from the glass heralding the lava flow of dense, spicy, bitter-laced caramel malts seemingly on a mission to smother every part of one's palate.

With red IPAs / hoppy red ales typically seen once a year (when autumn starts to turn to winter), you could argue the delight they bring is due to their relative novelty – and seasonal appropriateness – but I'm sure it's more than that. When done right these glorified battles between hops and malt are just taking our palates and tuning them up like the General Lee (but without the racist connotations).

If you look at the wider beer world, many of the best and most persistent beer styles are those that balance hops and malt perfectly. Sure, the very best get all aspects of structure / texture right, but at their heart it's that malt-hop balance which is key. And with hoppy red ales you’re essentially taking something like an English best bitter or classic pale ale, bringing them into the modern age, and turning everything up to eleven. And what's not to like about that?