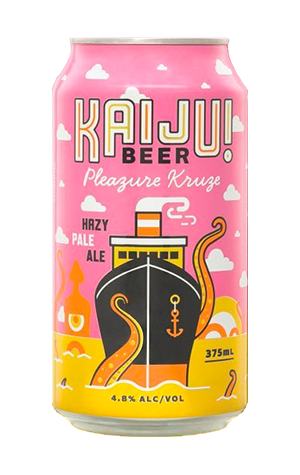 When KAIJU! threw open the doors to their Huntingdale Cantina, part of the plan was the use the brewpub as a place to showcase small-batch, venue-only beers. The very such first beer to make an appearance there was Pleazure Kruze, which was also their first stab at a hazy pale.

The beer, which was based around a combo of Amarillo, Nelson Sauvin, Citra, El Dorado, Mosaic and Galaxy hops, clearly proved a hit as it's already outgrown the Cantina – and then some, with the beer set for a nationwide launch in cans ahead of summer 2022/23. At the same time as its ambitions have grown, the beer has got a little smaller: the liquid now inside eye-catching pink cans featuring what appears to be a rather doomed cruise / Kruze has been reined in to 4.8 percent ABV from its initial 5.3.

That said, it feels bigger with a texture as full as the familiar dense yellow gold haze suggests. And the refined version of Pleazure Kruze still sits very much in the sweeter citrus / tropical camp, as if the brewers have made a dash down Dale Winton's fruit aisle with arms open as wide as the tentacles of the giant squid on the cans. As it warms, a deeper, greener, rind-like bitterness rises from the depths to underpin that fruity sweetness in what's a most contemporary companion piece for Krush.

If you're reading this in time, we're giving away ten cases of Kruze to members of our beer club, The Crafty Cabal. There's two ways to try to get your hands on one: here and here. Good luck!

And if you're not a member, there's a separate case giveaway running here in early summer.