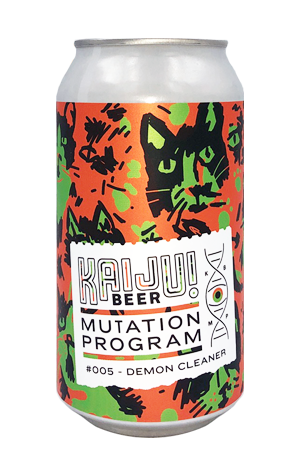 Oh, how times change... It's pretty much wired into the modern beer lover's system to pick up an IPA and know they'll be met by some combination of tropical fruit salad, sweet, freshly squeezed brekkie juice, candied lollies, and maybe a dash of beach bar cocktail. The one-two punch of jab at the olfactory system followed by swift left hook to the palate of yore has seemingly been lost in a rush to the juice bar. There are still occasional exceptions, however. And KAIJU! are the sort of brewery to come up with one.

That's the case with the fifth release in their Mutation Program, where it's less squishy embrace, more uppercut (which seems kind of apposite given current conditions, when you think about it). Sure, there's some sticky pineapple, a little citrus, even hints of that beach bar cocktail in the mix from the combo of Nelson Sauvin and Strata hops. But, as much as that, Demon Cleaner – named after the Kyuss track and featuring artwork inspired by their designer Mikey Burton's cat of the same name – is a dank, piney blast from the undergrowth, crushed nettles 'n' all, with a clear mission to carpet bomb your mouth with a lean, mean, resinous slice of old school bitterness.

NB KAIJU! have lined up a prize pack for Crafty Cabal members to celebrate its release – look out for details on Crafty and Cabal socials and the May 15 newsletter!

Leaving the brewery from mid-May...