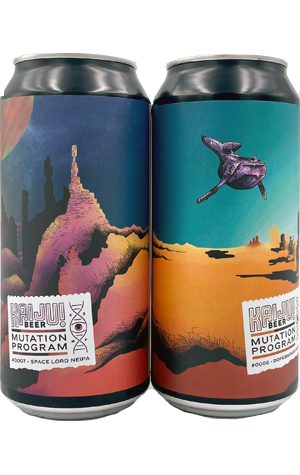 There's much that's familiar and plenty that's new in this twin release from KAIJU! – a twin release that really is a twin release. First, the familiar: the beers are both IPAs, a KAIJU! specialty, and are among the most hop-laden they've brewed. As for the new, it's the way they're coming at you: one of their Brisbane team members, George Levi (who you may well have read on these pages before) is also a multifaceted artist and here has been commissioned to create a subtly beer-themed dystopian spacescape. It's one complete with a couple of Easter eggs for the eagle-eyed and forms a complete piece when the two cans are placed together. Neat, huh?

As for the beers, they're both inspired by stoner rock bands (George had been pushing for a Dopesmoker beer for years, apparently, and now they've had their wish granted). You'll probably want to take on Space Lord first, though, given the NEIPA is the easier-going of the two. With its off white head and solidly-hazed yellow body it looks like lemon curd in a glass. Tuck in, however, and and the fulsome tropi-citrus aromas take it into more passionfruit / pineapple / citrus zest territory, while a bit of grip and resin helps keep this space cadet grounded.

Dopesmoker is the West Coast offering – bright golden with an even fluffier white head than its fellow traveller. Kaffir lime leaf, gooseberry and some quirkiness that reminds me of the neomexicanus varieties creeping into the market lead off in a beer that's lean as and comes with a palate-coating bitterness on a mission to set down roots. Miles – or should that be lightyears – apart from the Space Lord.