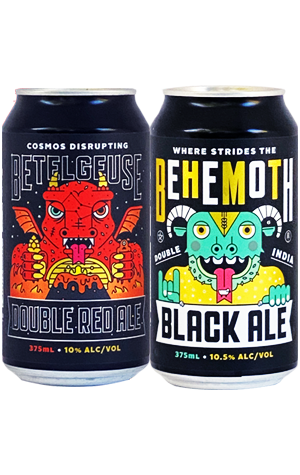 If a Melbourne-based brewery wanted to pick a time to launch two of their biggest beers side by side, the weekend on which the city was told to brace itself for another 50 days of curfew and stringent lockdown is about as timely as you could wish for. So thanks, KAIJU!, for providing your fellow city-dwellers with this one-two punch.

Neither is a new release, but neither is seen in the wild much either; indeed, in the case of Betelgeuse – the imperial version of their Hopped Out Red – this is a first appearance since 2017 (and a first run in cans). It looks pretty damn glorious (a bit like Melbourne this morning, in fact) – a bright-as-a-button rusty amber hue – and presents with an austere malt character in keeping with the appearance. And it's the beer's maltier side that really makes the beer what it is.

Sure, the combination of classic and more contemporary US and Kiwi hops ensures there's some dark citrus rind, berry, piney and earthy elements, plus a bitterness / carbonation combo that cuts through the heft like a sommelier pairing a rich dish with a suitably sharp beverage, but really you're here for the toasted, golden syrup-laced, dark sugar-sprinkled biscuity malts that settle in for the long haul.

Its fellow contestant in the heavyweight showdown is Where Strides The Behemoth, the souped up version of Cthulhu. Now, I'm not sure if you can (or if anyone has tried to) hop a liqueur coffee but if it's possible I reckon you'd end up with something along these lines. First up, you'll find freshly ground fruity espresso and herbal, citrusy aromas, then a spicy hops 'n' booze prickle on the palate that's joined by liquorice and molasses as the smooth, oily, nigh on imperial stout-looking liquid warms. Arguably its greatest talent, however, is the fact this 10.5 percent ABV, 125 IBU beast doesn’t sit that heavy on the palate. Go figure...