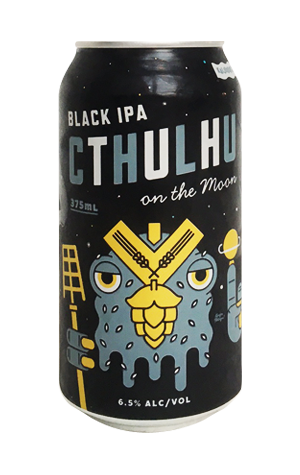 Given they launched themselves into the Aussie beer scene with beers that – at the time, at least – would have been one-off or seasonal releases for most of their peers, it's quite striking how infrequently KAIJU! release one-off beers themselves. Sure, there's a few that appear only in kegs each year, and fewer still that appear in cans, such as their Mutation Program beers, but for the most part they keep themselves happy (and growing in volume) with a pretty tight lineup, which makes revisiting one of the occasionals seem a good idea as it reappears for autumn 2021.

Cthulhu is their black IPA, one that's long been a favourite at Crafty Towers – the beer we suggested they showcase when they were part of the five-way Masterclass of Champions at a past Good Beer Week, in fact. Looking back at when we wrote about it as it made a first appearance in cans in 2017, it's clear they've kept steering it on the same path. Then, we wrote about the "aromas and flavours only a hearty BIPA can deliver, roaming from herbal, resinous hops to roasted malt, dark chocolate, mint and a hint of tobacco, all carried on an almost tar like body." It's as viscous as ever, while you can add liquorice, espresso, the darkest of fruits and a piney edge to the hops to that lineup too in a beer that keeps on giving.