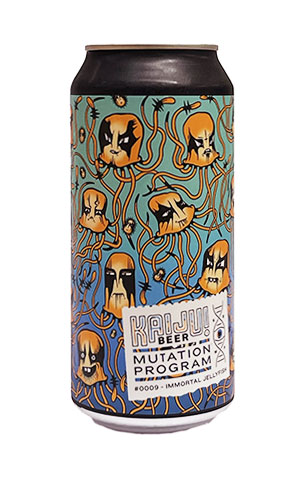 A nigh-on 8 percent ABV IPA crammed with hops? Sounds pretty much exactly like the beer you'd expect to pick up from KAIJU!, no? You might think so, yet the ninth release in their Mutation Program feels like something of a counterpoint to the sort of IPAs upon which they built their reputation: for one, it's sweeter rather than dry and bitter.

Sure, this is a hazy IPA that, appearance-wise, is at the gentler end of the spectrum but it's also one that presents rather fuller in terms of body and experience. The tropical fruit flavours within come across as if they’ve been reduced to a jus then whisked through a light sponge cake. And there’s something there that insists on putting the words “patchouli oil” in my head too; I mean, you’re not going to put Immortal Jellyfish in an oil burner and sit in the Lotus pose (although there's probably no harm in trying) but I’ll leave that thought with you and see what you make of it anyway...