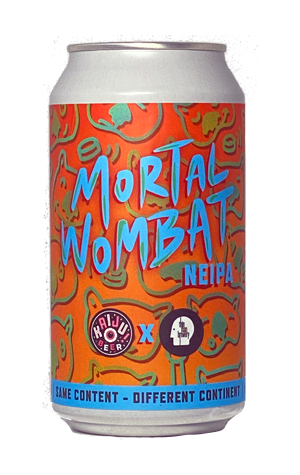 With borders closed and COVID-19 running rife through much of the planet, it's not really an ideal time to be creating an international collaboration. But if the pandemic has proven one thing it's that brewers are a bloody resourceful bunch. Thus it was that, following an introduction by a member of the Collective Arts team in Brooklyn, a couple of nights out and ongoing conversations, KAIJU! and New York State's Thin Man brewery came to brew Mortal Wombat, a hazy IPA featuring Aussie Galaxy and Enigma hops that's being released by both breweries into their respective markets.

We'll have the full story on the site next week, including how Thin Man had already brewed a past beer called Trial By Wombat, but for now, our take on the beer, which hits retailers from today (July 24). It opens with big, juicy Jaffa orange and passionfruit aromas, backed up by heaps of mango and melon rind flavours, all wrapped up in a lovely looking solid haze. There's a grassiness on the nose and a grippy resinous bitterness too, but given I tucked into my sample within a day of packaging you can expect it to soften and sweeten a little. Either way, you won't have an issue when it comes to finishing him.

NB There's a Mortal Wombat prize pack up for grabs for Crafty Cabal members too.