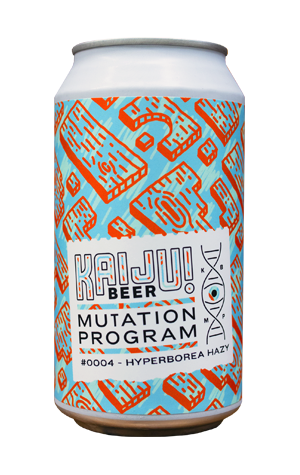 For all the very many IPA variants and other highly hopped releases KAIJU! have released since launching with a double IPA (as Monster Mash), they've proven rather resistant to the lure of the hazier side of things. Until now, at least, with the fourth release in their Mutation Program series: Hyporea Hazy, which uses the Conan yeast strain found in The Alchemist's genre-defining Heady Topper plus flaked oats and wheat in its mission to cloudy up the liquid in your glass.

That said, it's not actually that hazy a beer at all: think last vestiges of morning mist evaporating off a river and you're on the right track. (Or, steer clear of Pseuds Corner and just imagine a light golden-coloured beer with just the faintest of haze.) Where it does deliver, however, is on the hop front where fruity quintet Mosaic, Citra, Amarillo, El Dorado and Galaxy combine for the citrusy, tropical flavours you'd expect but also drop some pine forest and resin in the mix. There's something faintly creamy and vanilla like in there too, while Hyperborea has a sweet malty, boozy intensity in its armoury, creating an experience bigger than its 6.1 percent ABV might have you anticipating.