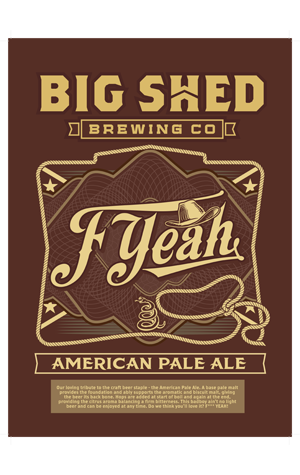 The Big Shed brewers have been getting into the fresh hop spirit. But rather than create a brand new beer to celebrate the new season's harvest, they've decided to put a fresh spin on one of their core beers. Fresh Yeah takes their F-Yeah APA and throws a bunch of freshly delivered hops at it.

The result is a beer that's been relocated from the States with the Amarillo hop of the original replaced with Tassie-grown Galaxy. According to the boys, they "carefully took steps to get the fresh Galaxy hops from Tassie ASAP so they could work the magic in the beer not on the truck while they were delivered to SA" with the result "a smooth and aromatic APA."