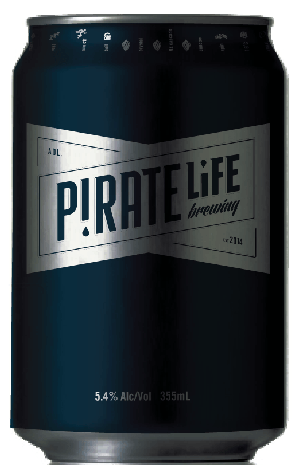 For their take on the pale ale style, the Pirate Life boys plant their flag firmly on the West Coast of the USA, one of many places the boss, Mick, spent time working in the beer world before helping get Pirate Life up and running. Given the comments of some when we attended their Melbourne launch, it would seem they've done a pretty good job; "If this had been pouring at Alesmith when I was there, it would have been the pick of their beers," was the view of one admiration-filled punter.

While hops are central again here, they're less of the leap out the can / glass variety and more of the sort that are happy to join arms with the rich maltiness of the beer. They're deeper and danker than those found in the Throwback or IIPA, with some of that pine forest floor character you expect from old school West Coast hops alongside the citrus elements, and are joined by prominent stewed caramel malts to create a creamy lushness on the palate. There's something herbal there too and a hearty bitterness to wrap things up.