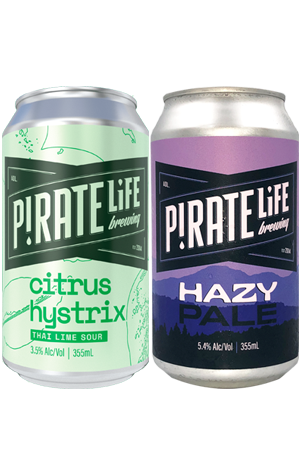 I'll be honest: I initially read the name of Pirate Life's mid-strength sour as Hysterics and started wondering whether they'd moved from putting nitro doses into their beers to giving fans a shot of nitrous oxide. But it turns out no nangs were harmed in the making of Citrus Hystrix; it's the name of a type of lime native to South East Asia, which makes plenty of sense once you taste the beer as the lime character isn't your typical one. It reminded me a little of the tingly tea tree and lime shower gel, while someone else mentioned musk sticks. Either way, the fruit adds a quirky edge to a tangy kettle sour with a lingering sweet acidity.

No such confusion with Hazy Pale, which does (mostly) what it says on the tin. Mostly, as it's not the palest of pale ales; think of the copper-coloured OG PL Pale and you're on the right track. Candied citrus fruits and rich caramel malts lead the way, with a welcome spiciness making an appearance on the palate alongside a solid finishing bitterness. Rather moreish.