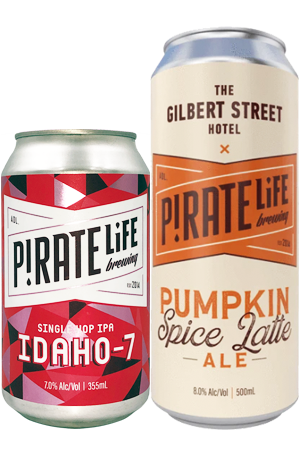 If you wanted to capture where the pointier end of the beer geek world was a few years ago and where it sits now, you could do far worse than with these two offerings from Pirate Life.

A decade ago, the arrival of single hop IPA series would get drinkers hot under the collar; not only were they a fun concept but there was an educational aspect too. With Idaho-7, Pirate Life put one of the fruitier recent releases from the US to work unhindered in an almost viscous, golden pour. Left alone, it unfurls its panoramic fruit salad display of pineapple, sweet oranges and ripe tropical fruits, before catching you a little unawares with a bigger stab of bitterness than the juicy opening suggested.

As Monty Python might have said: and now for something completely different, as the brewers – in cahoots with Adelaide's Gilbert St Hotel – look to recreate pumpkin pie in beer form by loading what's loosely an imperial amber ale with roast pumpkin, lactose, aromatic spices, and whirlpool additions of ginger and chilli. Weirdly, the first impression when taking a sniff of Pumpkin Spice Latte is of opening a bag of freshly harvested homegrown – maybe it's the spices and Mosaic hops playing tricks on the mind – but the true, sweeter character soon comes through. It's like spiced, sweet pumpkin pie, with a drying, toasted edge and a warming, spicy tickle.