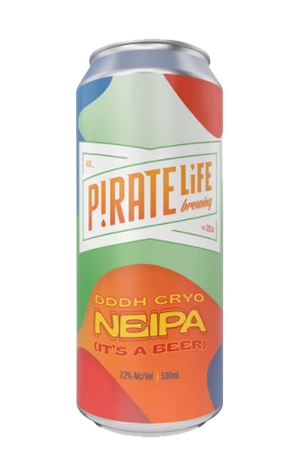 It's become harder to predict where Pirate Life will turn next over the past year or so, whether in terms of beers, such as light sours with unlikely ingredients, or partners; as I type these words, they've just unveiled a collaboration with Dilmah. That beer is the Tea & Biccies Brown Ale with which the SA brewers "are planning to push the boundaries on what tea and beer can be." For all that, there's been a steady stream of the sort of beers with which they rose to prominence, a spot in their lineup into which DDDH Cryo NEIPA slots.

Its full title, at least on the cans, includes (It's A Beer), which could be read as a nod to the manner in which abbreviations have run rife through the craft beer world or recognition that their greater reach these days means they have a role to play in educating drinkers new to such beers as to just what the hell's going on. That said, you need to go beyond the labels to find further elucidation – here, in fact, with an interview with their Perth head brewer Jackson Purser about the wider NEIPA and hazy IPA family. (Admittedly, I'm still not sure what the third D is for so we'll go with Double Double Dry-Hopped New England India Pale Ale; you can see why brewers abbreviate...)

As for the beer in question, it pours a pale yellow with a flash of peach, from which sprightly sherbet, grapefruit and stone fruit are delivered in sparkly fashion. The deeper, oily bitterness and softening nature of the NEIPA style do make themselves known – there’s a lot of hop oils in them there Cryo Simcoe, Amarillo, Mosaic and Idaho 7 hops, after all – but it’s no overly cloudy, weighty NEIPA, more a Soda Stream exploding in a bucket of citrus fruits.