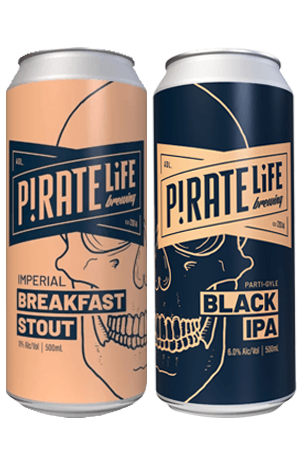 There's more than one way of getting two beers from one run through the mash tun. Sometimes brewers split their wort (the sweet, sugar-laden water extracted from mashing milled grains) into more than one batch and change up the hops, yeast or other processes. Sometimes brewers use the first runnings – the densest, most sugar-laden wort obtained when the mash tun is first drained – for one beer and then the second runnings – obtained by putting more water through the grains to extract more of the food-for-yeast left in there – for another.

This second method is known as parti-gyle brewing (where often the brewer will blend the separate runnings to achieve their desired result) and it's at the heart of two pairs of beers from Pirate Life. In this pair, they created an 11 percent ABV Imperial Breakfast Stout with the first runnings. It's as opaque and menacing in the glass as you'd expect of such a beer although it wears its alcohol content a little brazenly, with marzipan and a hint of varnish creating something of a distraction on the nose. Flavour wise, the addition of lactose and oats provides a smoothness, rounding out the espresso and dark chocolate characters, which sit alongside molasses, roast bitterness and some alcohol warmth within an oily body.

My favourite of the foursome – see the twin IPAs here – is the Black IPA made with second runnings. There's a fair bit of roast, liquorice and a hint of leather to the aroma, but the hops – Taiheke, Simcoe, Nelson Sauvin and Centennial – are present in abundance too, adding a viscosity to the palate and some piney, herbal characters to the mix. Dense, dark brown and with a bitterness that settles in, it's a real deep dive of a beer.