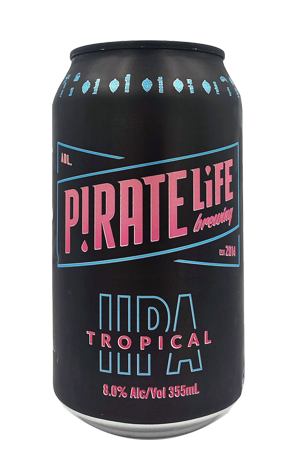 Pirate Life's IIPA might not have been the country's first imperial IPA but its impact in 500ml cans, both in terms of "Wow!" factor and success in competitions both public and industry based, can still be felt, with a series of other brewers following suit and popping such beers into bigger cans than their lower ABV hoppy releases.

Here, the SA brewers give their icon a neon-flecked companion piece, albeit in their now standard 355ml cans and at a slightly lower 8 percent ABV. The can designer had their work cut out squeezing all the hop varieties around the rim too: there's a Kiwi-US combo at play here made up of Kohatu, Wai-iti, Rakua, Mosaic and Amarillo. For all that, don't expect to be plunging your nose into the sort of tropical brekkie juice that's become so prevalent in the marketplace over the past couple of years; while there's fruit at play, so is some alcohol sweetness.

Less aggressive and less chewy than its IIPA forebear, imagine a lean, slightly boozy big IPA and you're on the right track.