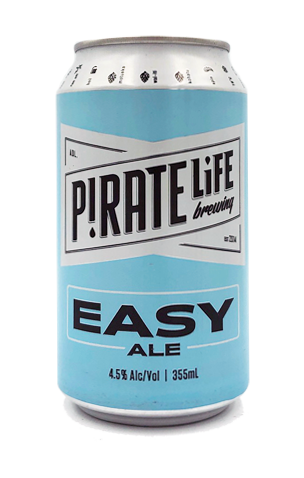 They've brewed many, many beers in various shades of pale and with various complexions of hop expression, both in terms of potency and character but, as summer 2019/20 kicks in, Pirate Life have made room for one more in their core lineup.

Easy Ale is, as the name suggests, designed for easy-going drinking. Yet don't go imagining a light, summer ale style beer, as this sits more in the space set aside for Australian interpretations of American pale ales.

"But they've already got an American pale ale in their core range," you might rightly point out. But that's a beer that sits firmly amid the bigger, bolder offerings typical of parts of the West Coast of the US rather than within the lineage of pales kickstarted by Little Creatures and tailored for Aussie palates.

Here, you have a light copper-coloured beer inspired by American cream ales, with flaked corn to aid body and some specialty malts there to contribute that colour and a little caramel sweetness. And, while hopping rates are low by their standards, the trio of Kiwis – Wai-iti, Motueka and Kohatu – still combine to give the beer gentle tropical and citrus aromas and flavours.

So, cast your mind back to where Aussie-American pales sat a few years ago, add in the polish many local brewers have added to their beers since, and you'll be on the right track. Easy.