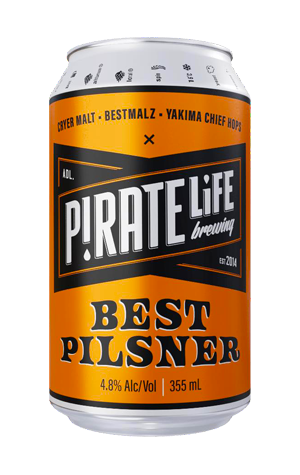 While it's a fairly common prefix for beers in parts of the world – many a British real ale brewer has a "Best Bitter" in their lineup, for example – it's still a reasonably bold choice to include it in the name of your beer in the home of the tall poppy syndrome. That said, Pirate Life have never been back backward in coming forward, and brought in some pretty decent partners when creating this pilsner: Cryer Malt, founded by the David of the same name in New Zealand three decades ago; German maltsters Bestmalz; and US growers Yakima Chief Hops.

The Adelaide-based brewers have released many a lager over the years, although I'm not sure any have echoed the classic pilsners of Europe to quite this extent, even with American hops in the mix here. The choice of hops was key to that outcome: while I've sampled Australian beers that have elicited some more contemporary fruit flavours from Loral, I've always found it to have a spicy, old school underbelly, while its partner here, Ahtanum, is known to bring a peppery quality as well as citrus.

Taken together with a grain bill made up of Pilsner, Caramel Pilsner and acidulated malts, they present you with a beer that's pale, clear and more traditional than new world, serving up a bready, cracker like maltiness, straw / hay aromas that keep any fruitiness in the background, and a drying, earthy-spicy bitterness that's aided in its refreshment-bringing mission by the acidity from the acidulated malt.

It's a cliché to call a pilsner crisp, but thanks to the collaborators' Best intentions, cliché time it is.

Only available at Dan Murphy's stores