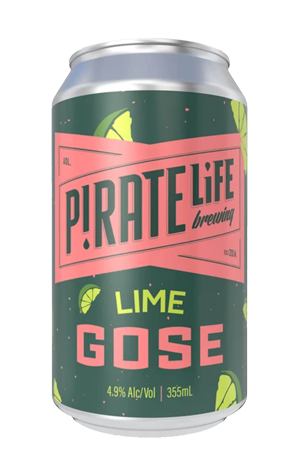 Kakadu plum and lemon myrtle. Lemongrass and ginger. Apple and guava. It's fair to say Pirate Life's brewers have been willing to look a little outside the box when selecting flavour-enhancers for some of their 2020 limited releases. It can make the arrival of Lime Gose seem rather sedate, in itself a reminder of how far the beer landscape has changed in the past half decade: a lightly soured beer featuring native finger limes, coriander and Murray River pink salt can be viewed as one with a relatively broad appeal.

In the flesh, it's also one with a Margarita like appeal, thanks to the opening hit of lime juice that first takes aim at your nose before streaking across your palate in the manner of a carpet-bombing mini-Zeppelin (limes look a bit like Zeppelins, right? Maybe? It's just me?). That said, there's a fluffiness too – a salt-enhanced softness – while anything you might tag as "sour" is kept on the low side, with the acidity from the lactobacillus melding with the lime zest in a manner that's summer-drinking-by-the-pool-refreshing more than Jesus-that's-cheek-sucking-puckering.